It is beyond any doubts that Google maps have disrupted the way we use maps in mobile. It has revolutionised the way we travel, use location-based content, show live traffic data or use it just for fun. In fact, Google Maps has tremendously increased tourism with more and more travellers preferring to use roads than other means.

Over the years, Google Maps has improved greatly. The advancements in hardware and software have enabled Google to pack in very powerful features. One such feature is the AI-based alternate routes recommendation.

Google Maps, by default, calculates the distance between two points and plots the shortest route possible over the map surface. This is the primary recommended route and highlighted in blue. The secondary alternate routes are displayed in grey. This feature is very helpful in letting the user decide the optimal route based on live traffic data or personal preferences. However, in Indian context, this information is not enough in letting the user decide the best route. There’s a piece of even more important information missing, and it is the condition of the road surface.

The objective of this research is to use smartphones as a means to measure and visualise the road surface condition in the map UI by analysing the vibrations observed by the accelerometer.

Google Maps is used as the map service for illustrating the road surface quality and traffic data.

To measure the vibration, an Android app iNVH developed by Bosch is used. This app has the feature to record vibrations in x, y and z dimensions and generates a CSV file that can be exported. And, to represent it graphically, DatPlot desktop tool built by Michael Vogt is used. It accepts the CSV data and plots individual charts for all the 3 axes.

The problem can be solved the same way Google Map works out real-time traffic data.

Google analyses road traffic to give us a pretty accurate indicator of the length of a roadblock and the approximate time to clear it. It uses multiple factors like:

The GPS device inside any smartphone, tracks and transmits the location (longitude and latitude) and speed at which the vehicle is moving. Based on the location accuracy, the live position of the vehicle is plotted on the map. Whenever there’s any interruption in the speed of the vehicle, it is marked and sent to Google. As and when more data gets accumulated through crowd-sourcing, Google Maps is able to plot the traffic condition to a pretty accurate rate. Based on the traffic density and average time taken to move across the jam, the navigation segments are coloured amber or red.

The below graphic shows the traffic conditions of a cross-road at different times of the day. It is interesting to note that based on traffic density, the time to cover that route changes dynamically. 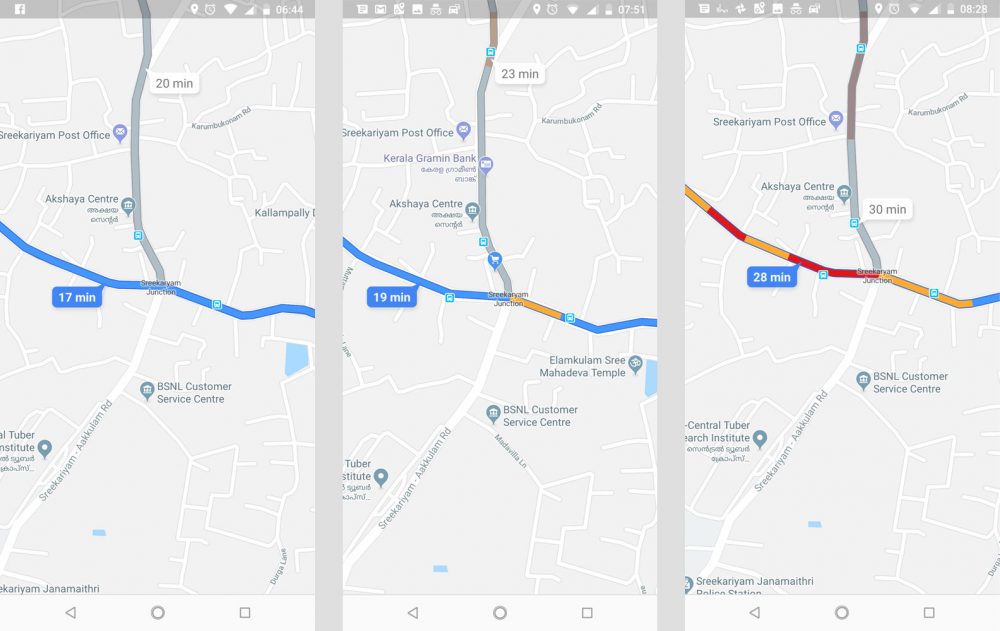 How to use smartphones to measure road conditions?

Let’s investigate, if by using the smartphone accelerometer along with the technology used for live traffic data, can we get any insights on road condition?

But first, let’s understand what an accelerometer is and how it works.

What is a smartphone accelerator?

An accelerometer inside a smartphone is an electro-mechanical device which is used to measure acceleration forces like any movement or vibration. This is possible with the motion sensors in accelerometer that can detect any tiny movement or orientation. In our everyday smartphone use, this helps in identifying portrait or landscape orientation, compass direction or even calculate how many steps you’ve climbed today.

Three of these systems across each x, y and z planes can accurately track the orientation and movement of smartphone and trigger any event inside the phone.

Let's get to work

The vibration data reveals that there’s very minimal vibration observed in the horizontal planar axis of x and y. The vertical dimension or the z-axis detects maximum vibration.

Now, let’s observe the vibrations experienced by the iNVH app when the vehicle is in motion. First, we will examine the vibration on a smoother surface of road and then on a rougher section. The test is carried out for a minute, during which a dashboard camera captures the visuals of the road condition and the app records the vibrations inside the vehicle.

Vibrations from a smoother tarmac

Let’s observe the vibrations experienced by the iNVH app.

Vibrations from a rough patch

A video of the vehicle moving on a rough stretch of road. The speed of the vehicle was around 20 kms/hr.
Here’s the data observed by the iNVH mobile app.
The maximum amplitude recorded is +7.642 and the minimum is -6.799.

It is noticeable from the recorded data that there’s considerable variation in the amplitude of vibration observed by the iNVH app when tested on the smoother road surface and a rough patch.

Based on the amplitude displacement, certain threshold value can be set that can categorise any road surface as normal, average or rough. 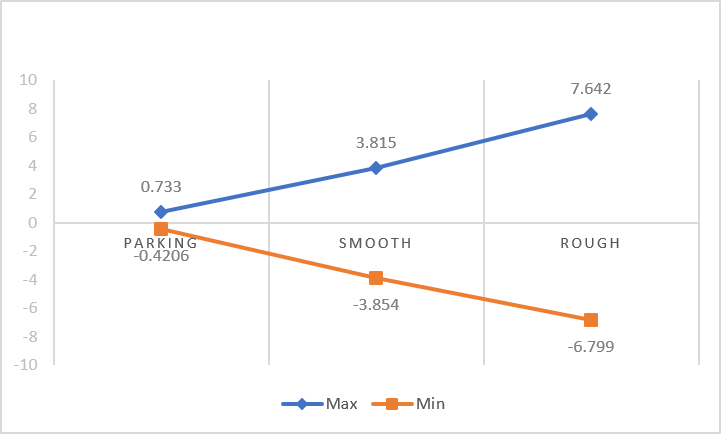 Note that the iNVH app uses accelerometer and smartphone hardware to measure and analyse the data. The results may vary depending on the type of phone and its variants, its internal sensors and the measurement locations.

It was a challenge to visualise the road condition types in the map UI. There will be instances of rough roads coupled with heavy traffic. Or, average roads coupled with medium traffic, or the mix of both. This problem was solved by:

Since both the data elements are supplementing each other, it has to be available together on the map.

Multiple design variations of option 2 were tried and tested with 5 users. 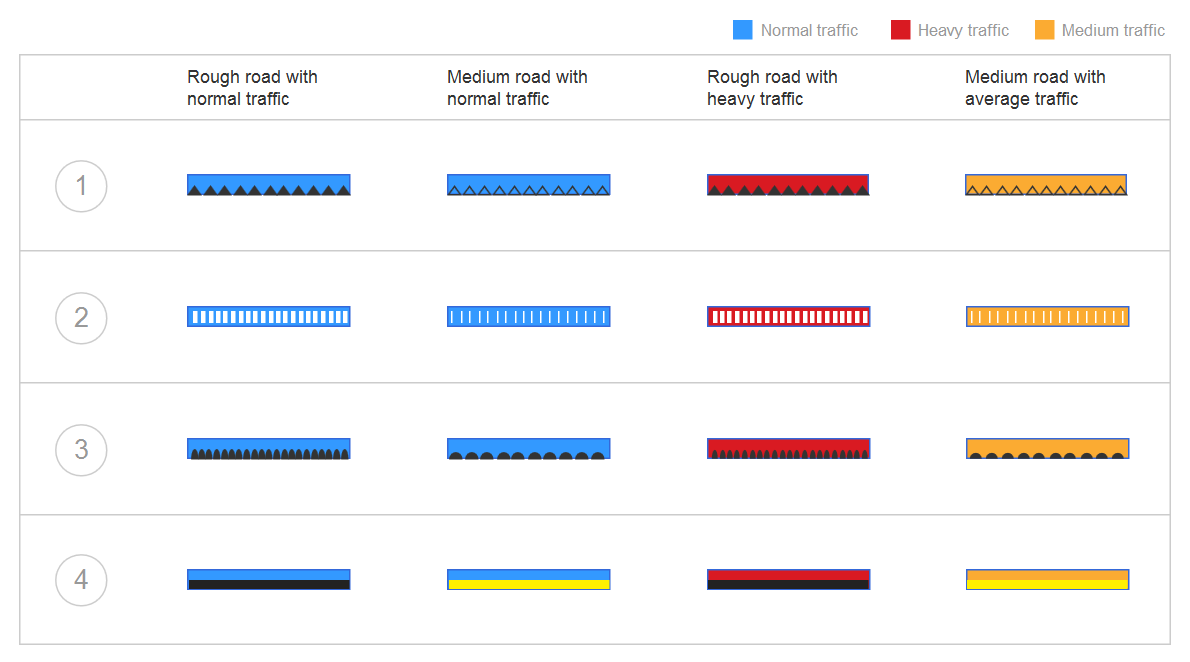 Users preferred Option 4 over others because of its minimalist approach. However, since it uses only colour to differentiate the road types, additional visual cues had to be added for better comprehension by the users.

The existing Google Maps colour palette for navigation was extended to include the road condition types. 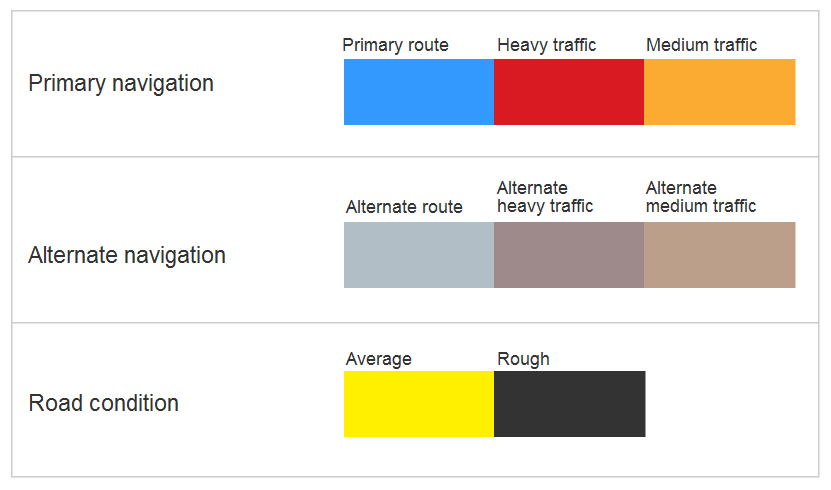 The map UI is re-visualised with this new visual representation and guidelines at multiple zoom levels. 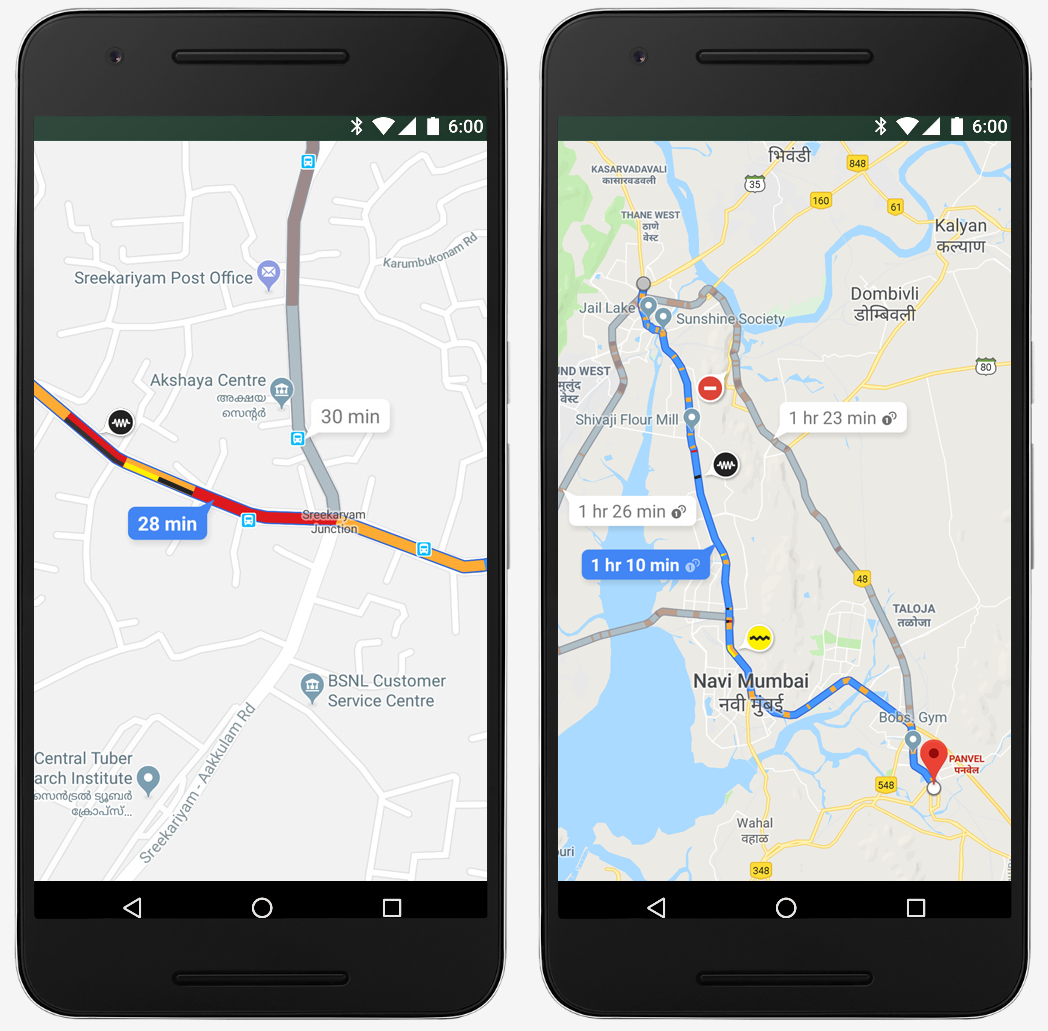 Powered with this new set of insights, Google Map UI looks and behaves way more intuitive than before. In one view, users can get live traffic data along with the road condition which is going to make it easier for users to select the best route.

However, there’s still one more limitation. It is up to the user again to make sense of all the available information and make the right informed decision.

Let’s hypothesise the possibility of using technology to make that decision for us.

The available data parameters can be combined together using an algorithm to generate a numeric value termed, Road Health Index, that will indicate the health or drivability factor of any road.

The following data parameters can be used for this:

Road Health Index can be represented on a scale of 1–10 with 10 being the best route with the essence of all the above parameters. 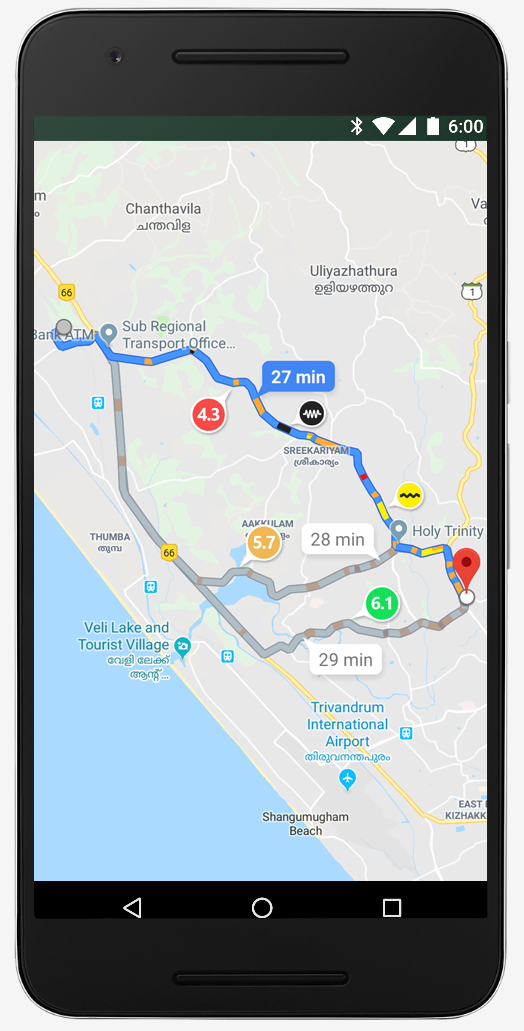 With the Road Health Index value, it would be so much easier to select the optimal route from all the recommended ones. The alternate routes recommendation feature would be an even more powerful and will take map navigation to a totally new level.

Bad roads in India are not going to go away any time soon. So, the mapping services need to consider this fact and provide unique and innovative solutions to Indian consumers. This is an attempt in that direction to augment the Google Maps UI to understand the Indian psyche of how we use our roads and provide a tailor-made “desi” solution, just for us.